Have you ever said yes to something, only to dread the obligation when it comes due? I have, many-many times. I recently read a blog post by Seth Godin on saying “no.” Here are his thoughts (republished with permission):

Seth Godin: On saying “no”
– If you’re not proud of it, don’t serve it.
– If you can’t do a good job, don’t take it on.
– If it’s going to distract you from the work that truly matters, pass.
– If you don’t know why they want you to do this, ask.
– If you need to hide it from your mom, reconsider.
– If it benefits you but not the people you care about, decline.
– If you’re going along with the crowd, that’s not enough.
– If it creates a habit that costs you in the long run, don’t start.
– If it doesn’t move you forward, hesitate then walk away.

Thanks, Seth. I’ll respectfully add a couple of my own to your list:
– If you’re going to say no, do it now. “Maybe” is not fair to the asker.
– If you’re saying yes out of fear of offending the asker, say no, you’ll grow stronger.
– If you’re unsure, sleep on it, then say no in the morning.

Copy and pasted from:

The Journal, a monthly newsletter from Kevin Rose. 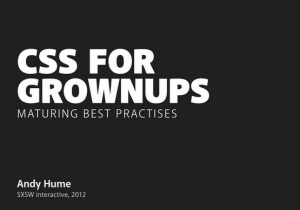 I just read pretty good article about reasons why are good programmers leaving and why others staying.

How To Keep Your Best Programmers | DaedTech.

If you ever wondered how to check for file if exist while you were using carrierwave gem with storage on amazon S3 here is how.

Assuming you have User class:

then only thing that you have to do is this

thats it. I kind of assumed that it should be simple avatar.exist? but you have to get fog instance of file to be able to access exists? method.

Jane McGonigal: The game that can give you 10 extra years of life | Video on TED.com.

Here’s a link for Super better game from talk.

This article is quite good, but as every article you have to make up your min about it. Don’t follow every advice blindly. Think and then you practice. Remember, start behaving like someone who you would like to be and then you will become that person.

I had conversation with @mattwilliams about weather and how it would be great to have some tools that will tell you if it will be warmer / colder than yesterday. So you can decide what to wear or what to bring (like umbrella) with you to work. So I build it and you can try it here. Let me know what do you think.

From developer point of view:

Whole thing is build in latest rails. I’m using Google API (that have no documentation) for weather feed, Twitter for messaging and for authentication. The whole thing is hosted on Heroku.

The woman seemed to be making some pretty good points, until she stopped with, “Ugh! Those (people she disagrees with) are just so stupid!!”

She could have said Southerners, Northerners, Republicans, Democrats, Indians, or Americans. It doesn’t matter. She had just proven that she wasn’t being smart.

There are no smart people or stupid people, just people being smart or being stupid.

(And things are often not as they seem, so people who seem to be doing something smart or stupid, may not be. There’s always more information, more context, and more to the story.)

Being smart means thinking things through – trying to find the real answer, not the first answer.

Being stupid means avoiding thinking by jumping to conclusions. Jumping to a conclusion is like quitting a game : you lose by default.

That’s why saying “I don’t know” is usually smart, because it’s refusing to jump to a conclusion.

So when someone says “They are so stupid!” – it means they’ve stopped thinking. They say it to feel finished with that subject, because there’s nothing they can do about that. It’s appealing and satisfying to jump to that conclusion.

So if you decide someone is stupid, it means you’re not thinking, which is not being smart.

via Smart people don’t think others are stupid | Derek Sivers.

Davis was a man of few words. When he did speak, his words often had a similar effect to a hand grenade being lobbed into the room. In 1987, he was invited to a White House dinner by Ronald Reagan. Few of the guests appeared to know who he was. During dinner, Nancy Reagan turned to him and asked what he’d done with his life to merit an invitation. Straight-faced, Davis replied: “Well, I’ve changed the course of music five or six times. What have you done except fuck the president?”

via Miles Davis: his wardrobe, his wit, his way with a basketball … | Music | guardian.co.uk.

I don’t think winners beat the competition because they work harder. And it’s not even clear that they win because they have more creativity. The secret, I think, is in understanding what matters.

It’s not obvious, and it changes. It changes by culture, by buyer, by product and even by the day of the week. But those that manage to capture the imagination, make sales and grow are doing it by perfecting the things that matter and ignoring the rest.

Both parts are difficult, particularly when you are surrounded by people who insist on fretting about and working on the stuff that makes no difference at all.